SJT: When did you first know you were destined to be a writer?

NM: I first talked about writing a book probably in 4th grade. I didn’t think of it in terms of being destined to be anything. It’s just where I ended up.

SJT: Who would you cite as your influences?

NM: That’s a tough question. As a writer, I’m influenced by my experiences, good and bad. I won’t name names for the people involved. My daughter has been a huge influence. Having a child with autism exposes you to an entire world you never knew existed. All of the groups I’ve done table top gaming with have influenced the stories I want to tell. The stories my husband, Bryan Fields, and I built together while gaming since 1990 still have elements that…

Jay Wright II is a 41 year old lover of horror and fantasy.  He loves writing about his home state of Alabama and spends his time between his writing and his family.

You can check out the prologue here for free:

and go to his author’s page(s) which are listed under his contacts to get updates.

How would you describe your story in one sentence?

An R-rated Buffy the Vampire Slayer told from a Vampire’s perspective.

What inspired you to write your story/characters/theme?

I always loved Vampire movies, novels, etc but I noticed this terrible trend (especially lately).  Vampires have turned into good boyfriend material and lost a lot of their edge.  Either that or they’re terribly broody.  I wanted to present them in a different way.  While yes my Vampire protagonist does have a…

Feeling A Way
After The Collapse Book 1
S.A. Gibson 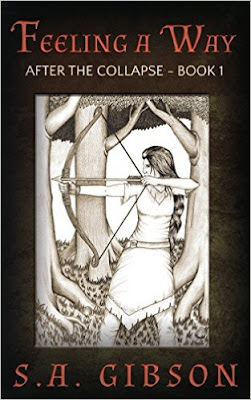 A child has been kidnapped and swordsman William Way must save him, but doing so will not be an easy feat. In this post-apocalyptic world, where new dangers and mysterious happenings lurk at every corner, doing what’s right could lead to unimagined threats.

While William’s journey has just begun, Kalapati, a bow woman for hire, has begun her own quest. But she is charged with delivering a child to a sinister cult leader, bent on taking charge and controlling the lives of all those in the state.
As William and Kalapati fight to complete their missions, they soon come to wonder how their efforts will change their futures. Will they join forces for the greater good or will the past experiences of each limit the choices available to them? The battle for libraries to control the future of California begins.

Translated editions can be a great way to reach a wider audience. But they’re expensive and risky to fund yourself. A translator has to reinterpret and rewrite your book, and that level of expertise isn’t cheap.

Sharks and scammers abound, especially as it’s hard to evaluate the results. Then how do you get the translated edition proof read? How do you market in a language you don’t speak?

For years I’ve been exploring options to get my books translated but so far I’ve had false starts. I’ll share a few cautionary tales below. But the reason I’m writing this post is because Amazon Publishing has opened up an important new opportunity. Its imprint Amazon Crossing, which publishes works in translation, has announced it’s seeking submissions from rightsholders, including indie authors (apply here).

This would be a publishing deal, of course, so much depends on whether you’re a good…

Scenario: You’ve recently self-published your first ebook, it’s doing awesome, and fans are clamoring for a print copy. You’re eager to oblige them, so you start formatting the book for print. But you just can’t figure out how to get those damn headers to cooperate with you!

Never fear, friend. I’ve got your back.

Step 1: Double click in the Header area of the page

Step 2: Get yo Header settings in order, son!

The Header & Footer Tools tab should appear once you’ve opened up the Header area. Click the Design tab and make sure the following boxes are checked:

In the world of real things cats win—at least by the numbers.  According to the Humane Society, the US has 86 million purrfect domestic kitties but only 78 million tail waggin‘ doggies.  But in the world of fictional characters (books, cartoons, movies, etc.) the situation isn’t just reversed, it’s tipped over onto its adorable, swivel-eared head.  Sure, you can find examples of beloved dog and cat characters aplenty, but keep trying to name them, and you’ll run out of cat characters long before you run out of the Fido’s of fictiondom, the Cujo’s of crime, or the Lassie’s of late night.

On Wikipedia’s pages about fictional animal characters, the cat and dog lists are broken down into literature, comics, film, and television.  The cat list offers 26, including Garfield, the Cheshire Cat, the Cat in the Hat, Puss in Boots, Sylvester the Cat, Tom &…

After The Collapse Book 1

K.S. wrote:“My best friend is in an abusive relationship with her boyfriend. He has beat her multiple times and recently when she spent the weekend at her friend’s house he showed up at their door in a drunken rage. They called the police on him and now she’s saying that she doesn’t want to make a statement to the police and has moved back in with him. She assures me that everything is “Under control” but I’m not absolute that it’s as cut and dry as she thinks… I mean, should I intervene, or just trust her judgement?”

Liz says: This sounds like a classic case of battered women’s syndrome. He abuses her, he apologizes/brings gifts/makes promises, and then she’s back with him, hoping it never happens again. But it does happen again, and the cycle continues. In other words, your instincts are right.

Author Andy Weir was born and raised in Southern California. His father is an accelerator physicist and his mother an electrical engineer. Weir grew up reading classic science fiction. His favorite authors were Arthur C. Clarke and Isaac Asimov. When he was 15, was hired by Sandia National Laboratories as a computer programmer. While Weir has studied computer science at UC San Diego in California, he has not obtained a graduate degree. Instead, he has been working as a programmer for software companies such as AOL, Palm, MobileIron, and Blizzard.

Weir has been writing stories since his mid-twenties. His first short story, The Egg has been adapted into YouTube videos. His first novel The Martian began as a free series on his website in 2009. As the story progressed, his readers gave him pointers and helped him with the scientific…